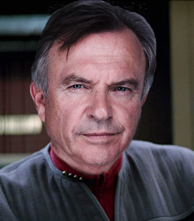 Born to John and Andrea DaSilvor, on Vulcan. Eldest child, younger sister Rosemary born on Earth. Mother (Starfleet medical nurse) transferred to Tric-Cor hospital (Vulcan) after training met Father at spaceport (Lt DaSilvor – science officer / shuttle pilot). Love at first sight.
Went to the usual mix of Federation schools, parents postings meant some schooling completed on starships. His parents posting made it difficult for him to make friends and would often seek solitude. His favorite place the observation deck, and he was often found staring out of the window, watching the stars go past.

Finished schooling and joined starfleet in 2358

DaSilvor has the habit of staring without realizing . It can be quite uncomfortable if he ends up staring at somebody, so he usually avoids looking too long at anybody while talking to them. He appears to be fairly laid back and easy going, but in reality he is very self critical and a perfectionist. There are times when it seems the universe is only there to annoy him, but generally he enjoys life and his career in starfleet. He has his own views on right and wrong and some people find him a bit harsh, but he will defend what he believes to be right, although not always to the death.

He has a normal sense of humor and likes to (if the chance arises) see stage shows of his favorite comedians. He has got himself in trouble a few times with senior officers for things which he regard as good humor, but others regard as flippant or sarcastic.

He is normally a lateral thinker, and works better under pressure. If the pressure is off, can be a bit slow and may need things explained in more detail. Because of his ability to think laterally he is a good tactical thinker and can often spring a surprise on a more logical thinking person/opponent.

Atmospheric flying is his favorite hobby, in particular Gliders, he enjoys having to work to keep the glider in the air and have flown across Death Valley in the USA ( for real, not on the holodeck). Enjoys walking, usually alone. Because of his troubled childhood he enjoys his own company and when on leave he will go backpacking and hiking. Likes to watch birds of prey hunting and thinks the brutality of nature is fascinating.

At the time of his transfer to FOX had have never had a long term relationship. He enjoyed a brief relationship with Linda Southey (USS Highland), but they are currently only good friends. While serving with FOX he became involved with Dr Kateri Beniah. This relationship lasted for several months until her death during a mission to intercept the ‘Probe’ that was returning to Earth after the death of the two whales brought from the past by Admiral James T Kirk in the late 2200’s. Her death left him devastated and there are no records of him being involved with anybody else until he met and Married Dalenna Coolidge who was serving onboard the USS Conqueror.

His quarters are not decorated in any way, the only personal thing on view are two pictures. One of his family (Father, Mother and younger sister) and another of Kateri, who despite having married Dalenna, remains close to his heart..