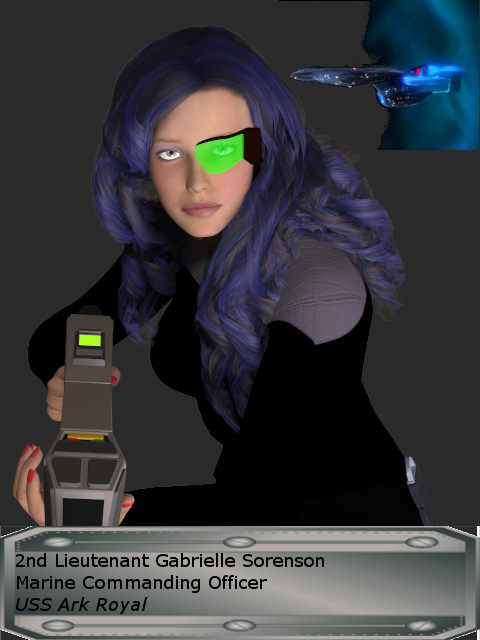 Gabrielle Sorenson is the Marine Commanding Officer aboard the Ark Royal, her first post out of the Academy. She had an older brother that was lost in the line of duty on his first misison.

Gabrielle was born to Mark and Emily Sorenson in a small cottage on Earth. Her 5 year old brother, Michael, was immediately wrapped around her finger from the moment she first cooed at him. They grew up nearly inseparable as the years passed. When Gabrielle was 5, another new little life was brought into the world by her parents, her sister Rebecca was born.

The family was very close and loved each other very much. Michael initially protected Gabrielle from the schoolyard bullies and whatever else came her way, but that dynamic shifted when Rebecca was born. Gabrielle learned from her brother how best to protect the little one and did so without a second thought.

Gabrielle loved dancing as a child, and her parents actively encouraged her to continue honing it into a craft of beauty. She taught her sister as well, but Rebecca didn’t have quite the same talent for rhythm that Gabrielle had (not that she didn’t enjoy twirling with her sister anyway). Her entire family never missed a single recital, as it was the most important thing to her next to them.

When Michael turned 18, he joined the Starfleet Marine Corps. While this didn’t come as a shock, it did come with worry. Their parents were concerned with what might happen to him, but they didn’t want to stand in the way of his dreams. Michael left for training and the Academy, becoming a commissioned officer.

Shortly into his first assignment, the Sorensons received the news that they dreaded the most. Michael had perished in the line of duty. Gabrielle did the one thing that her parents had never expected her to do and signed up the next day. She thought to herself that if they had been together, they could have protected each other.

Gabrielle joined the Academy as well, earning her commission and her first assignment after her four years.